Alberta Bair Theater, in one iteration or another, has been an integral part of the cultural scene in Billings for more than 80 years and is located on the colonized lands of the Crow, Northern Cheyenne, Sioux, and Blackfeet peoples.

The Fox Theatre served as home for the Billings Community Concerts Organization for more than fifty years. It was also the home venue for the Billings Symphony Orchestra & Chorale and offered live plays and musicals that benefited the Fox Committee for the Performing Arts. This Committee was responsible for bringing such stellar performers as Dizzy Gillespie, Ray Charles, George Winston and Judy Collins to our community. The Fox Committee’s name lived on in the popular ‘Fox Series’ offered each season by Alberta Bair Theater.

In 1978 the Fox Theatre was purchased by Carsich Theaters, a movie house company. They planned to renovate the much loved but decaying theater into a three-screen, modern day movie house. The Fox Committee stopped this conversion and involved other community leaders in a drive to raise funds to renovate the building. The community support of the fundraising campaign was overwhelmingly positive. 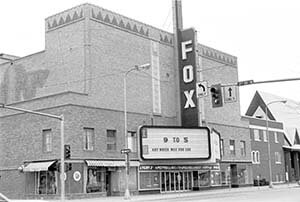 The original Charles M. Bair family homestead sat on the same spot where the Fox Theater was built. This house, on the corner of what is now North Broadway and Third Avenue North, is where Charles’ daughter Alberta M. Bair was born. This prompted Alberta Bair to provide the lead gift for the project and in 1987 the renovated Fox Theatre was named in her honor.

Thanks to the dedication, vision, and hard work of the founding board members, the Fox Committee, and numerous community-minded people, the Alberta Bair Theater, a 501c3 nonprofit, still stands as a world class performing arts center for the people of Billings, its surrounding communities, and the Northern Rockies.

In 2018 the theater’s board of directors once again began a historic journey to renovate the theater so it could continue meeting the needs of touring productions and the expectations of modern audiences. In May 2019 construction began on a $13.6 million expansion and renovation that is scheduled to be completed in summer 2020 with a grand re-opening in Fall 2020.